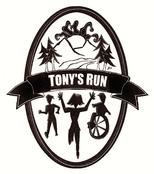 Help us with missing or incorrect information and photos/videos-we'd love to add them! Please contact Lisa Haggblom at 907-842-2320 or records@safebristolbay.org.

The idea for a run was first conceived by Dillingham Police Department (DPD) Officer Anthony (Tony) Jones as a way to bring the community together and to raise money for SAFE. Tony was also dedicated to teens in need of positive role models.  On 02/12/1992, while Tony was on duty, he was fatally shot in downtown Dillingham by a troubled youth. Dillingham was wrapped in shock and grief.
One way DPD honored Tony’s memory was by proceeding with his idea for a run.  DPD Chief Ralph Taylor consulted with SAFE Executive Director Ginger Baim, and the first Run, named Tony’s Annual Run Promoting SAFE (TARPS), was born in May, 1992.  It was unknown if Tony had a name picked out for the Run, but by naming it after him, coordinators sought to increase public awareness of the devastating effects of violence, and continue his efforts to promote non- violence. Now, Alaskans from Aleknagik, Anchorage, Dillingham, Eagle River, Fairbanks, Homer, Manokotak, New Stuyahok, Soldotna, and Togiak have participated over the years, as well as visitors from Indiana, Texas, Wisconsin, and England. In keeping with local tradition, potlucks were held after the Run.

In January, 2018, SAFE chose to not host Tony's Run as a SAFE function, and in May, 2018, gave the Run to the school cross-country team to help them raise funds.  This fit perfectly with Tony's passion for running and engaging youth in running. One of the team's coaches grew up in Dillingham and participated in the Run as a youth, so she was enthusiastic about the transfer.

Click on the page links below for each year's details throughout SAFE's Run coordination.

1996-1997: Waning interest and pledges prompted The Fifth TARPS to open to the public, participating in teams of twelve runners each, and included registration fees and pledges. The name TARPS was shortened to Tony's Run.

1998-1999: The course was shortened from 60 miles to approximately 26.6 miles (called the long course) and the starting line changed to Mile 19 Aleknagik Lake Road. Walkers and rollers joined runners, and volunteers staffed aid stations. The course turned right on Kanakanak Road and turned around close to the hospital to finish at the downtown Fire Hall. In 1999, participants could roll the course solo.

2005-2014: To accommodate marathon and half-marathon runners needing certified courses to qualify for other events, the long and short courses were modified and certified with USA Track & Field (USAT&F) to be exact marathon (26.2 miles) and half-marathon (13.1 miles) distances through 2014. Course monitors were added to the volunteer list to prevent participants from cutting the courses short. Alaska Department of Transportation and Public Facilities (AKDOT&PF) required formal traffic control plans to minimize the likelihood they would be sued in the event of death/injury during the Run. Certified flaggers joined the list of volunteers. By 2006, team registration dwindled as participants preferred to be with their family/friends on their course, prompting elimination of teams. Two courses were added-the 5k and 10k, with start lines on Mile 3.2 and 3.6 Kanakanak Road, to accommodate shorter distances. In 2011, rollers could participate in the 5k.

2015-2016: Participation declined to record lows by 2014, so the marathon and half-marathon courses were eliminated. The 5k and 10k courses were re-routed and a 20k course was added (the 10k course twice).  The start and finish line were the same, and the courses were out and back types all on the Kanakanak Road Multi-Use Path (MUP) and road shoulder. 2015 participation numbers returned to healthy levels for the Run, but 2016 numbers plummeted to a record low of 37 for the 25th Anniversary. SAFE opts to continue the Run if a volunteer from the community coordinates the Run, with SAFE staff coordinating the potluck.

2017:  The Run entered a transition year as SAFE staff transferred Run coordination to a volunteer from the community.  Since 20k course participation was low in 2016, the course was eliminated.  The start/finish line was moved to the school parking lot, allowing the 10k course turnaround to still be on the Kanakanak Road MUP and eliminating the need for a traffic control plan and equipment.  Expenses were reduced by limiting advertising and not purchasing shirts. For the first time, the school cross-country team and their supporters participated and/or supported the Run.